Altenburg & Wymenga, together with Wetlands International, developed a prediction model of the height of the annual flood peak in the Inner Niger Delta in Mali. The forecast model is used by the Direction Nationale de l’Hydraulique du Mali for the water management of the river. The model is developed and implemented under the BAMGIRE program, led by Wetlands International and financed by the Dutch government.

The Inner Niger Delta, an area nearly the size of the Netherlands, is inundated from September onwards to about the end of January. The height of the flood and the extent of the inundations depend on the rainfall in the upper catchment, in the upper basin in southern Mali and in Guinea. On the basis of satellite derived rainfall data and the rising water levels rise at the monitoring stations in the delta, we can already foretell in August how high the flood will be during the peak in October or November. This is of great importance to the people in the delta, as their socio-economic activities – fishing, agriculture and livestock raising – depend on the flood. Recently, a new website is launched, on which rainfall and the flood can be followed: www.opidin.org 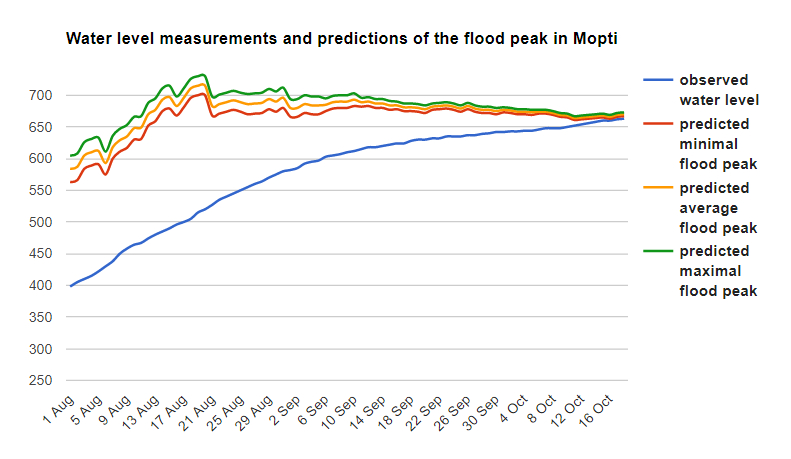 Example of the daily prediction of the height of the flood in the Inner Niger Delta in Mali in 2018 on the basis of the observed water level in Mopti (blue line) and the rainfall in the catchment area (www.opidin.org).

The use of satellites for information about the weather has become common place as many people use the rainfall radar to know if rain is coming. In remote areas satellite derived information become..

Worldwide the water management of delta’s, rivers and coastal regions – often hotspots of biodiversity – is a major challenge, in particular in view of climate change and the dramatic decline..