Currently, there is a massive vole outbreak in the province of Fryslân, in the northern part of The Netherlands. The occurrence of field voles follows a cyclical pattern, with a peak every three or four years. Sometimes that peak results in a major outbreak, such as in 2004-2005 and 2014-2015, and as it appears, this year too.

Voles – latin name Microtus arvalis – typically occur in grasslands in open landscapes on clay and peat soils. Vole outbreaks are clearly visible on satellite images. An analysis of Sentinel-2 images shows that the highest densities – in terms of damage to the grassland vegetation – can be found on the peat soils in the lake area and southwest corner of the province of Fryslân. In many places here, the green grasslands have been turned into brown and bare fields. The visibility on the satellite images has greatly improved due to a combination of drought and warm weather in recent weeks and the increased damage.  The vole populations may still increase in numbers, as their reproduction continues until October. By inundating their grasslands, farmers try to control the damage.

Research shows that there are several risk factors for a vole outbreak, such as the coincidence of dry and relative warm winters, the absence of predators and the phase of the vole cycle. When an outbreak is imminent, grasslands on drained peat soils in open landscapes are extremely vulnerable, in particular in absence of grazing. 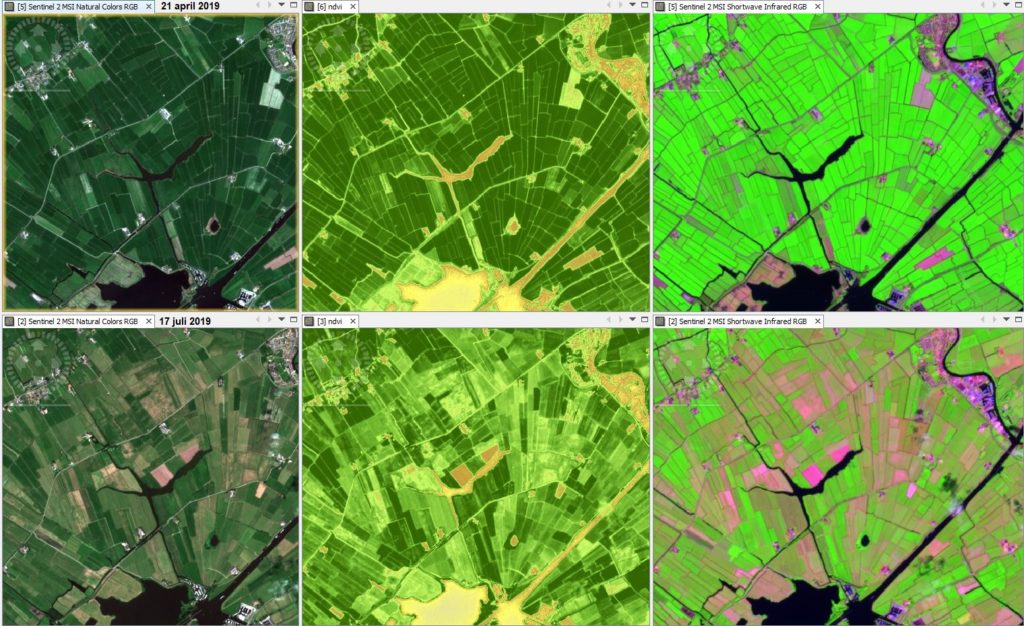 Analysis of Sentinel-2 images (above April 21 and below July 17, 2019) of the an area in the Frisian lake area (​​Tersoal). On the left a true color image and in the middle the vegetation index (NDVI). The darker green, the higher the NDVI value and the greener the grasslands. Water and buildings are yellow. Mown plots have low NDVI values. Plots with voles and drought damage have a spotty pattern. On the right a shortwave infrared image, on which bare and dry soil is pink. Mark the difference between the April and July images.